Thank you for listening to A Feast of Friends on the Station that Loves you, KTUH 90.3 FM in Honolulu. You can also catch us on the following Frequencies:

I didn’t play the live version but Marc Almond sings “If you go away” even more so with such heartfelt passion in the live version, followed by Jacky, both songs a tribute to Jacques Brel. “If You Go Away” is an adaptation of the 1959 Jacques Brel song “Ne me quitte pas” with English lyrics by Rod McKuen. Many artists have also covered this song, including Frank Sinatra, Dusty Springfield, Shirley Bassey, Barbra Streisand just to name a few.

Falco passed away not too long ago, but his memories linger. This album included a reworked German-language version of The Cars song “Looking for Love”, entitled “Munich Girls”, which I played, as well as a lounge lizard cover of Bob Dylan’s “It’s All Over Now, Baby Blue”.

Thank you again for listening to A Feast of Friends on Hawaii’s only Alternative KTUH 90.3 FM. Here’s the playlist for April 19, 2014. If you miss this show, you can catch us every Saturday night from 6pm-9pm on the following frequencies:

The song by the one and only Lou Reed (Velvet Underground), is a special in this 1984 release covered by Rose McDowall and Jill Bryson better known as Strawberry Switchblade. 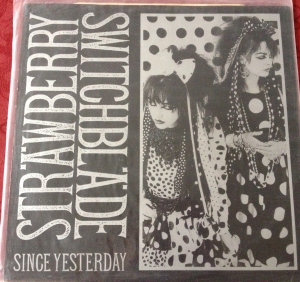 In this vinyl collection of mine, I played the Entended E Reg Model track of Cars, produced by Gary Numan and special remix by Zeus B. Heid

One of my favorite Bauhaus albums recorded Live at Liverpool and London by Beggars Banquet, 1988. The album cover is a classic taken by Eugene Merinov. You’ll never forget it.

I got this album just earlier today from the Secret Record Day Sale at Downbeat Diner and Lounge from DJ Monkey.
This Album is definitely another collectible because Kate Bush rarely has concert tours and makes very rare appearances. Kate Bush will play her first series of shows since 1979 this coming August and September in the UK. There is a live version in this album of James and the Cold Gun.

Talented drummer and producer Keith Le Blanc released this album in 1989 mixed by Adrian Sherwood.
He has worked with many talents in the industry including Annie Lennox, Depeche Mode, The Rolling Stones, Peter Gabriel, Afrika Bambatta and Ministry, just to name a few.

From the Metropolis Label a special vinyl edition released in 2013. Thank you Tom Shear (Assemblage 23 ) and Void (Nephilim Halls ) Love the live remix version of Disappoint.

Flew solo on A Feast of Friends. Lana is off. It’s always sad for me when she’s not next to me but she’ll be back. I hope you enjoyed the evening. Thank you to my guests: Lola Love and La Femme Rikita for coming on the Show. They have a new production called NEON DREAMS that you must see if you’re into dreams, neon lights, the mysteries of sex and your ABCs. The amazing Unkle is a band from England who collaborated with many talented musicians such as Robert Del Naja of Massive Attack, Bassist, Mani of The Stone Roses, Thom Yorke of Radiohead, DJ Shadow and of course Nick Cave and Ian Astbury of the Cult. I felt inclined to play more of the Cult after watching them stream live on Coachella. Thanks for the reminders to tune in, SF friends John Zaterka on text and Lita Tulloch on Facebook. I remember watching the Cult perform live at the Sheraton Ballroom in Honolulu when Ken Rosene brought them down on October 2, 1987. From their earlier days as the Death Cult, Southern Death Cult- they are still rocking and truly one of my greatest inspirations and one of resident bands on A Feast of Friends. Celebrating her birthday, I’m a big fan of Lisa Gerrard of Dead Can Dance- did you know that? I wonder if she would come to Hawaii and perform for Miss Vamp Hawaii in the historic Hawaii Theatre- the perfect venue for DCD. Just putting it out there in the Universe. I always bring my personal collection of music on A Feast of Friends and when I bring my very personal collection and probably my most prized are the limited editions/vinyl collectibles such as Sisters of Mercy’s When you don’t see me (remix) I picked up from a record store in London and the Joy Division Martin Hannett’s personal mixes. Record producer, bass guitarist and Creator of the Manchester Sound, Martin Hannett (Martin Zero) helped developed the Joy Division and one of the founders of Factory Records with Tony Wilson. Listen to his influence on Unknown Pleasures (1979), Closer (1980) and Still (1981), just to name a few. “Glam rock” and “Glampires” rocks and so does the passionate Robbie Quine of the Barbarellatones. I have to say Robbie is one of the most passionate musicians I know. He never stops making music and always inspired. The Monster of KTUH is a fan of the Barbarellatones and the Monster called in when he heard Goth Hippy. I have to remember to ask Robbie about Goth Hippy. I first met Robbie when he played at the Wave Waikiki with his band Sex with Lurch. Good times !

Thank you for listening to A Feast of Friends. Here’s the playlist for April 12, 2014.

Listen here to A Feast of Friends with DJ Nocturna and Lana Saldania every Saturday night from 6pm to 9pm on the following frequencies:
90.3 FM Honolulu
91.1 FM North Shore
89.9 FM Windward
866 Digital Cable
or online: http://www.ktuh.org

Lana and I throw events around town if you’re interested, come on down. Check it out here on our website:
www.djnocturnaandlana.com
or check out my website: www.djnocturna.com

The 80s and remixes

TUNE IN TO A FEAST OF FRIENDS with DJ NOCTURNA AND LANA SALDANIA on SATURDAY, APRIL 12, 2014 6pm-9pm on KTUH 90.3 FM for an interview WITH the ONE AND ONLY LOLA LOVE and LA FEMME RIKITA.

Exploring the ABC’s of SEX, Pretty Peacock Productions takes you on a journey to the mystical world of Neon Dreams. Running April 24-27, 2014 at The ARTS at Marks Garage, first-time playwright, Lola Love has teamed up with choreographer La Femme Rikita, Maui’s black light burlesque beauties – The UltraViolets, Aisis Chen of Hawai’i Women in Filmmaking and Hi Capacity to create a black light theatrical production – combining burlesque, dance, aerial and new media art. The cast includes Lola Love, Madame X, Tita Titsling, Mabsy, Hunter Down & Opal Rouge and many more of Honolulu’s handpicked performers who will help guide you through the ABC’s of sex.

The show features custom costuming by Rose Wolff and Carlyn Wolff (Manoa Valley Theater), props and accessories using 3D printing (Hi Capacity) and visual images created by Aisis Chen. A blend of visual art, movement and theatrics, Neon Dreams is guaranteed to take you out of this world.

Thank you for tuning in ! A Feast of Friends Radio Show is hosted by DJ Nocturna and Lana Saldania every Saturday night on KTUH 90.3 FM (6pm-9pm). You can also log on to their website www.djnocturnaandlana.com

DJNocturnaAndLana & Decadent Events Proudly Present HAWAII HORROR BALL. This event to be held on August 15, 2014 at Next Door is a tribute to all things “HORRIFIC” most especially as it relate to FILM, FASHION, MYTHOLOGY, ART, DRAMA, THEATRE, MUSIC and DANCE. More information on this event is forthcoming but for now….Let’s plan for the horrific summer coming up.

This is a CALL FOR FASHION DESIGNERS who are interested in participating in the HORROR BALL Fashion show. This is the time to contact us now to reserve your space and create your designs if you are interested in showcasing your classic, original work in this unique fashion show that depicts the theme of “Horror.” Space is very limited so contact us now. First come, first serve. For more information and to sign up, please contact djnocturna@gmail.com Please copy, paste and complete the following:

If you have additional questions, please let us know in the email. We are excited to have you on board to experience THE HORROR ! THANK YOU ! Please visit this site for updates or go to www.djnocturnaandlana.com

“Burning love- consuming the existence exhaled with great screams-has no other horizon than a catastrophe, a scene of horror that releases time from its bonds.” Georges Bataille

“Where reality fuses with dreams, and dreams turn into visions of horror.”

We’re always having a great time on A Feast of Friends every Saturday from 6pm to 9pm on Hawaii’s Only Alternative, the Station that loves you with DJ NOCTURNA and LANA SALDANIA.

You can catch us live by going on the web www.ktuh.org or by tuning in to one of the following KTUH frequencies:
90.3 FM Honolulu
91.1 FM North Shore
89.9 FM Windward
866 Digital Cable

Life Guide, astrology and author Alice Inoue returned to A Feast of Friends on March 22, 2014 and this time with colleague and author Dr. Chad Sato to talk about healing your body and his book, Infinite Body Wisdom.
available here.

Lana and I would like to have them back again soon and this time to discuss the apparent phenomenon happening right now around us called “Cardinal Grand Cross,” 2014’s single most powerful astrological event that may affect everyone differently. If you are interested in knowing more about the big change ahead of us, please stay tune here for more details or check out our news and updates: www.djnocturnaandlana.com

Chad is one of the life facilitators at Happiness U. For more details visit www.yourhappinessu.com
Alice has a column in the Honolulu Star Advertiser called “Go Ask Alice.” If you can wait, you can also “Go Hear Alice” on KTUH’s A Feast of Friends.

A Feast of Friends, a music, talk show and more airs every Saturday night on KTUH 90.3 FM from 6pm-9pm with DJ Nocturna and Lana Saldania. Thank you for your continued support ! 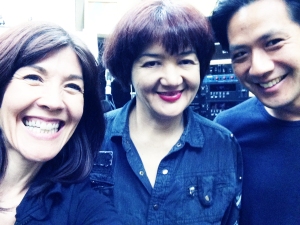 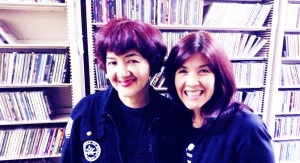 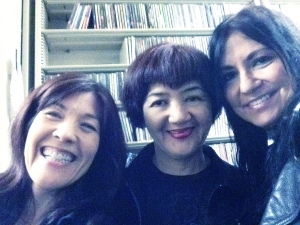